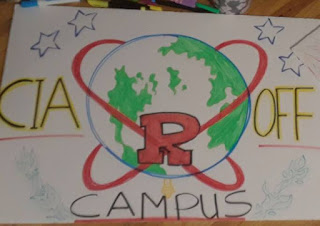 Our Facebook page Rutgers Against Campus Militarism https://www.facebook.com/CIAOffCampus     was recently contacted by a Targum reporter who had some excellent questions for us.  While I am not sure if there will be a Targum article – we thought it be best if we expand on the topics he was introducing – please enjoy the following replies that explore our concerns about the DIA funded Intelligence Community Center for Academic Excellence (IC CAE) and all of that Rutgers institution’s trappings:

What was the grant for and what does the center do?

For background, see links under the "Addendum" of this article including to a Targum article on the topic.
https://njnouswarinme.blogspot.com/2018/03/anakbayan-rep-us-intelligence-to-get.html

While the Targum has provided some background on the DoD funded war operation, we invite the Targum to join us in widening the inquiry of exactly how far this operation goes and exactly what Rutgers is on the hook for - to get the $2 million in war funding.  Specifically, we would like to see the complete proposal that Rutgers submitted.  That is important to see what Rutgers was willing to offer to bring this war operation to NJ.

We also need to get our eyes on the complete contract that specifies each and every commitment Rutgers has made to the US war effort and US intelligence operations and what exactly Rutgers is getting from the DoD for its willingness to compromise any principles regarding a free and open university where students from throughout the US and world can study without feeling the threat of a killing presence on the campus.

We hereby publicly request that Rutgers provide to us the proposal it submitted to the DIA and the complete agreement that it has put in place for the $2M funding of the IC CAE.

Some of the questions we would like to have answered include:

Is there in the agreement that Rutgers must invite National Security State into the process of defining best practices for balancing First Amendment Rights and the "fight against hate" or any other aspects of student conduct code?

Is there in the agreement, that Rutgers participate with US intelligence in data analytics of the social network behavior of Rutgers students and staff and other behaviors?

What are the arrangements for monitoring students, faculty, staff and visitors on campus, particularly those from countries where the National Security State is active, has operations, is in some sort of dispute or conflict with, is assisting police and military forces of or assisting corporate security of?

What are the relationships between the national security state agencies working through ICCAE and the Rutgers police / safety offices and officers?  With Rutgers faculty and Rutgers administrators?

Why are some students opposed to it?

Rutgers University is weaponized in pursuit of the military objectives of the Department of Defense which counterposes the purpose of a university.

DoD objectives are counter to those of an academic institution and would tend to encroach upon freedom and pursuit of research and knowledge – instead it would attempt to direct that process toward propaganda in support of war objectives.

As we stated in our press statement for our protest of DIA involvement in a “Best Practices” forum on balancing “fighting hate” with preserving First Amendment freedoms:

“Right now, the world faces the very real danger of ultimate US war, and the US is threatening escalations in Asia, the Middle East, Latin America, and Africa. The nominee to head the CIA is a known torturer who destroyed damning evidence. The appointee as National Security Advisor is an extreme war hawk who has openly called for a US first strike attack on Korea. Homeland Security and ICE are continuing a crackdown, rounding up 1000s of immigrants and reportedly targeting those who are actively organizing opposition to repressive US immigration policies. The FBI is actively targeting Black activism under the rubric of “Black Identity Extremism.” The NSA is fully unleashed, gathering every bit of electronic data on people in the US and in the rest of the world.”

Is there a history of social inequality and surveillance?

The history of CIA, just one of the agencies, is well documented.  There is no way to do it justice in a newspaper interview.  We are organizing a panel discussion but even at that event, we will only be able to touch on the murderous criminal history of the CIA - not to mention all of the other involved agencies.  Indeed there could be not only a minor, but a major, dedicated to studying the record of CIA, NSA, DIA, DHS, ICE, FBI involvement in promoting repression, oppression and injustice.  We would like to invite all Targum readers to attend the forum and to follow the live feed we will broadcast from it.  Stay tuned for more details about that upcoming event.

Rutgers has been a site of complicity with the inherent violence of the Intelligence Community for decades. Due to the nature of classified information, we can only cite instances that have already been declassified, decades after the fact.

This in and of itself is cause for concern. Research funded by CIA money was conducted without the knowledge of researchers and the subjects of the research in the 1950s. This specific study on Hungarian refugees was used as part of Project MKULTRA, which was used as research for psychological/behavioral control tactics. This heralded the rise of IRB and the establishment of mandatory ethical research guidelines such that such covert intelligence strategies would be considered unethical moving forward.

However, the secrecy of the Intelligence Community cannot and is not, by nature, bound to these standards in the name of “national security.”

In the 80s, the head of the Rutgers Political Science Department had a secret contract with the CIA to study the disarmament movement in Europe.  He had an entire class engaged in research in support of that CIA objective, unbeknownst to the students that their research on the Europe disarmament and labor movement was being incorporated into a report for the CIA.

Since CIA is typically secretive in its relations with universities, faculty members and administrators, it can be assumed that such operations were more pervasive and what became known is likely just the tip of the icerberg.  Likewise, now with this public DIA financed project of the IC CAC, this public operations is no doubt a cover for more secretive dealings including widespread recruitment of faculty, administration and students.  It has been reported that current CIA and other intelligence operatives are coming to campus - ostensibly as guest lecturers - and students are getting internships including paid internships and “study abroad” opportunities - basically going to do intelligence field work as paid operatives.

Why should students know about this?

Students should know about this, as this is contrary to what they are paying tuition for. Rutgers is a renowned research university, and that in part is why students from all over choose to attend. Research has and is being unethically conducted on our campus to propagate US imperialist violence as funded by the DIA; that this is the case is completely contrary to the integrity of our university as a research institution.

Foreign students in particular, should be aware that there are agencies operating on the campus that might be targeting their country, their friends and family back “home”, their freedom struggles and other political efforts that they might be sympathetic to - that their solidarity efforts with their own people could be of interest to these agencies, that Rutgers might even facilitate and assist in monitoring their communications on behalf of these nefarious agencies.

At the recent protest, there was a strong presence of Filipino students, for example - and the US Defense Department is directly supporting the death squad government of Duterte that is targeting activists of the movements for freedom from dictatorship, repression and US imperialism, movements that many in the US support.  It is a dangerous place now for these and other students from parts of the world where the United States is escalating tension, threatening warfare and participating in assassination, bombing and other forms of killing.

John Cohen, who is apparently the defacto CIA station chief of Rutgers University and the chief Rutgers counsel - Rutgers top lawyer - John Hoffman, presided over the part of the recent symposium aimed at setting the groundwork for defining “best practices” for fighting hate on campus and in the social media.  The fact that Rutgers and the DIA connected the two demonstrates that part of the plan is analyzing student social network participation - analysis of great interest to the intelligence agencies which targets movements around the world and domestically that some students are supportive of.  With the CIA history in assisting death squad operations and its nefarious ties to dictators and killers of every sort, this relationship of Rutgers literally puts the family members of students and even the students themselves when they travel back to their countries - literally in potential peril!

What does/can Rutgers do to ensure fairness and safety?

First off, Rutgers should release to the public the complete offering proposal it made to the Pentagon seeking this blood money and the complete contract it has with DoD without hesitation or unnecessary red tape.

Rutgers should terminate the ICCAE.

Instead, Rutgers should set aside $2M for an equally equipped operation to train opponents of US war to coordinate opposition to the dangerous moves currently being taken that endanger the collective safety of our world.

If the student body is silent as University resources are dedicated to the US war effort through this DIA contract and the ICCAE, that makes the student body complicit with the US escalations of warfare and the fast step toward ultimate warfare - nuclear warfare - which ends up destroying the planet.  Concerted action of the students, faculty, staff, community and the disarmament and antiwar movement to end this Rutgers complicity is necessary.