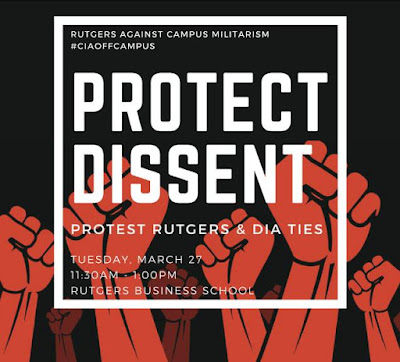 Rutgers students, faculty and alumni have announced a press conference in response to the Rutgers Symposium entitled “Fighting Hate While Preserving Freedom: A Best Practices Forum” being held at the Rutgers Business School, 100 Rockefeller Road, on the Livingston Campus on Tuesday, March 27. The press conference will occur outside the building where the event is occurring from 11:30 to 1pm. The press conference has been called by Rutgers Against Campus Militarism and NJ Antiwar Agenda organizations.  This is a press conference outside the building where the event is taking place and there is no intention to disrupt the symposium nor are we trying to have the symposium canceled.

Opposing hate and all of its manifestations on campuses, in social media, and in the community should be everybody’s objective. However, there is a taint to this symposium due to its sponsorship and participation of Rutgers centers connected to, and with overlapping staffing of, the Rutgers Intelligence Community Center for Academic Excellence (IC CAE). The IC CAE is funded through a $2 M grant from the Defense Intelligence Agency of the US Department of Defense.

We are not opposed to a symposium on the topic of fighting hate. We recognize that many important voices are being represented at this symposium and some are important advocates for causes of justice and against racism who have a proven record of calling out abuses of the US criminal justice system and US foreign policy. We welcome their voices to the campus. 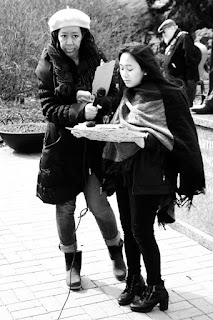 Our concern with this symposium is not the representation of community voices and advocates on some of the panels. Our concern is over the involvement of the National Security State in a symposium, co-sponsored with the Office of the President, Robert Barchi, that sets out to define “Best Practices” for “Fighting Hate while Preserving Freedom.”

We are concerned that the involvement of these agencies in defining “best practices” for opposing hate could lead to restrictions on student speech and activities that oppose the actions of those agencies, including warfare, the crackdown on immigrants, torture, domestic surveillance aimed at criminalizing opposition to US policies, and the pervasive electronic surveillance of everybody who uses electronic communications.

Right now, the world faces the very real danger of ultimate US war, and the US is threatening escalations in Asia, the Middle East, Latin America, and Africa. The nominee to head the CIA is a known torturer who destroyed damning evidence. The appointee as National Security Advisor is an extreme war hawk who has openly called for a US first strike attack on Korea. Homeland Security and ICE are continuing a crackdown, rounding up 1000s of immigrants and reportedly targeting those who are actively organizing opposition to repressive US immigration policies. The FBI is actively targeting Black activism under the rubric of “Black Identity Extremism.” The NSA is fully unleashed, gathering every bit of electronic data on people in the US and in the rest of the world.

Meanwhile, students, faculty, staff, and alumni at Rutgers and community members around NJ are organizing around these topics, opposing US policies and opposing the role of the Defense Department at Rutgers. The agencies that have been invited by Robert Barchi to shape “best practices” for fighting hate on the Rutgers campuses have a direct interest in undermining the effectiveness of student opposition to those policies. The national security state has no business in defining such policies – their involvement can only result in the “worse practices.”

Our concern is the involvement of the National Security State in the process of defining policies that could end up restricting the right of students to dissent against the policies promulgated by these agencies. That Robert Barchi is facilitating their involvement in this process demonstrates the precise reason why the $2 Million DIA grant and the IC CAE project it is funding is anathema to the very purpose of the university.

Rutgers Against Campus Militarism and NJ Antiwar Agenda will present a panel discussion that will fully explore the implications of the Department of Defense funded Intelligence Community Center for Academic Excellence in April. This discussion will be part of an effort to actively oppose the support that Rutgers is providing to towards the escalation of total global warfare.


For more on the topic:
Intelligence Center at Rutgers Protested at Newark Monthly Antiwar Protest

The following is the part of the symposium that is most concerning, from 1:30 - 2:30pm.  John D. Cohen is one of the top professors in the Defense Department IC CAE program.  Due to his compromising intelligence connections to the national security state - for the reasons cited above, he should not be providing any back drop or even participating in a process that can end up modifying campus conduct and speech and student protest rules nor modifying or expanding the definition of the word "hate" or any other loaded legal words that could be used to disrespect student rights to organize around the issues of the day including US warfare.

The participation of Rutgers administration's top lawyer makes it real clear that they are aiming to change such policies.  Then there are two police officers.  I have no personal knowledge but we can assume that national security state intelligence services regularly work together with campus police forces.  The final two listed, we know not much about and have no quarrel with their participation.

Our point is - the agencies described above should not be part of this "best practices" process.

Countering Hate Online and On Campus