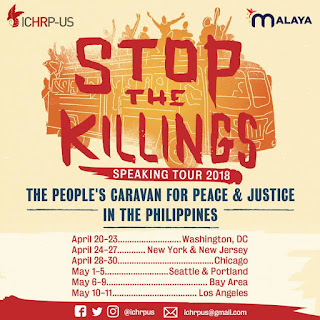 On April 25th, at the Stop The Killings Speaking Tour 2018 NJ event, many gathered to join ICHRP-US Northeast and Malaya Movement to call for an end to the state-sanctioned violence in the Philippines made possible in part by US aid. Henessa Gumiran, an organizer with Rutgers Against Campus Militarism delivered a solidarity statement in support of the Philippine people, condemning the involvement of US intelligence and its presence on campus.

The following is the solidarity statement given:


Rutgers Against Campus Militarism stands in solidarity with the Philippine people who organize against fascism and continue to resist the US-Duterte regime. US intelligence has perpetuated and aided the oppression of the Philippine people both historically and presently, and now has the direct and implicit support of universities, including Rutgers to do so. The involvement of US intelligence at Rutgers has been active since at least the 1950s, with active campus resistance to the presence of US intelligence since the 1980s. In January 2015, Rutgers received a nearly $2 million grant for the establishment of the CCIS or the Center for Critical Intelligence Studies, funded by the DIA, making Rutgers the only “Big 10” school to be federally recognized as an “Intelligence Community center for academic excellence.”

As stated by the DIA, the mission of the Intelligence Community Centers for Academic Excellence is to: “Provide grants to competitively chosen universities and colleges to enhance the recruitment and retention of an ethnically and culturally diverse Intelligence Community workforce with capabilities critical to the national security interest of the United States.”

It is then clear that the ultimate goal of these centers is not to “provide students with essential knowledge related to the field of Intelligence Studies and enhance their understanding of different regions, cultures, and value systems that inform the effective 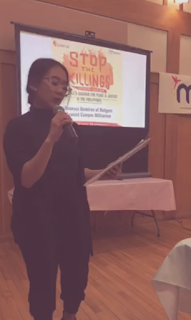 use of intelligence” as posited. Rather, the underlying initiative is to create a pipeline of direct recruitment into the intelligence community. This conditions students to act as proxy recruiters for US intelligence, and by extension, US imperialist violence, which of course is reinforced in countries like the Philippines, due to US political interests in maintaining the status quo of exploitation.

The center is headed by a former acting under secretary of DHS, the Department of Homeland Security, John Cohen. As we know, DHS is responsible for the inhumane treatment and denial of basic human rights to peace activist Jerome Aba. We should hold Rutgers accountable for sponsoring the presence of DHS and other US intelligence agencies on our campus, when such agencies have always and continue to be a threat to peace and inflict violence on both our local and global communities. It is time to demand that Rutgers terminate its ties to the intelligence agencies that actively preserve its complicity in state-sanctioned global violence, and we cannot do so without standing with peoples who are directly impacted by such.

And in the spirit of eternal solidarity with our motherland, I share with you all an excerpt of Ruby Ibarra’s "Us" featuring the spoken word of Faith Santilla:

So let it be known, if you don’t already
Pinays have always been part, and parcel, if not, imperative and critical to the struggle
Filipinas are no strangers to wielding our own power
Of all the privileges that exist in this world, none of which you may be a benefactor of
There is at least one you bear
And that is the privilege of having been born a Filipina
Your DNA contains building blocks made from the mud of over 500 years of resistance and survival
And when you are ready, sis, we’ll be right here

Thank you to all participating organizations and individuals for graciously speaking out against human rights abuses.

NO TO FASCIST DICTATORSHIP!

STOP THE WAR ON THE POOR!
Posted by Henessa at 3:32 PM