The editors of NJ Daily Targum struck a major blow to efforts led by NJ Senator Sweeney to usher in a wave of repression against students and faculty at public universities and public schools.  Sweeney has sponsored a proposed bill that would target anti-war and pro Palestinian activism - anyone that criticizes Israel - for sanction and possibly even criminal charges.  The Rutgers Daily Targum - in its long held tradition of being a bastion of advocacy for free speech has stated today, November 25,  clearly and unequivocally - opposition to the bill even calling upon students to actively engage in work to stop it! 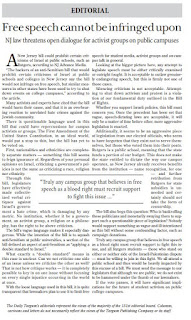 I have to admit that over my long years I had tussled with Targum reporters and editors - as a political activist at Rutgers in the 70’s and 80s.  I might have thought that they made me personally and activists in general look silly upon occasion.  (I was doing street theatre in a horse costume on College Avenue once - long story.)  In their minds maybe we were looking foolish - and you never know - we all stumble here and there.  But The Daily Targum as long as is I can remember has always been a bastion for free speech - and today they once again ring that bell!

This is a clarion call for all the state newspapers (many have already denounced this attack on free speech) to reiterate their opposition and especially all of the campus newspapers across the state of New Jersey need to read today’s Targum editorial - and come out swinging with your own defense to inform the students on ALL OF THE CAMPUSES of NJ about these dangers!  That is a most important impact that the Targum editorial can have.

But we all need to take the link to the editorial and tweet it to Assembly and Senators as well as to news outlets - especially campus - throughout NJ, the US and world!

As the Targum states:

“First, nationalities and ethnicities are completely separate matters — something this bill seems to feign ignorance of. Regardless of your personal opinions on Israel, criticizing a government's policies is not the same as criticizing a race, religion nor ethnicity.

Through this bill, legislators have effectively made collectivized verbal critiques against Israel's government a hate crime, which is damaging by any metric. No institution, whether it be a government, an activist group, a religion or a philosophy, has the right to be above criticism.

What exactly a “double standard” means in this case is unclear. Can we not criticize one side of an issue unless we criticize the other as well? That is not how critique works — it is completely possible to key in on one issue without focusing on every single injustice occurring in the world at once.

With the loose language used in this bill, it is quite transparent that lawmakers plan to use it to limit free speech for student media, activist groups and on-campus talk in general.

Looking at the bigger picture here, any attempt to legislate speech must be either critically examined or outright fought. It is acceptable to outlaw genuinely endangering speech, but this is firmly not one of those cases.

Silencing criticism is not acceptable. Attempting to shut down activism and protest is a violation of our fundamental duty outlined in the Bill of Rights.”

The dangers of this bill were brought to the attention of the Rutgers community at the AMLU meeting at Scott Hall, on September 12, in a panel discussion hosted by All Marxist Leninist Union that was broadcast live on Facebook by NJ Revolution Radio.  The event was coordinated between AMLU and #NJAntiWarAgenda with participation "as individuals" of members of American Muslims for Palesine.

AMLU also brought it to the attention of the Rutgers campus through an op-ed that the Daily Targum ran on October 29. 2019.

The AMLU op-ed excerpted below detailed some of the activities among university and high school students opposing the proposed repressive law.

“The anti-war and anti-imperialist struggle would most certainly be crippled, as U.S.-Israeli imperialism is undeniably a global force at the center of many destructive wars and conflicts across the world.

The ability of groups to form coalitions among the anti-imperialist Left would be strictly limited under the bill in such a way that our liberties of free assembly would be curtailed.

The NJ S4001 Bill, if passed, would persecute any group or individual in educational institutions like high schools and universities who would be “delegitimizing Israel by denying the Jewish people their right to self-determination and denying Israel the right to exist.”

That . .. . bill, in the end, would prohibit Students for Justice for Palestine (SJP) and Boycott, Divest and Sanctions (BDS) clubs and speakers on campus and thus restrict their right to speak and protest against Israel’s war crimes. . . .

But we are not alone in our opposition to this bill.  A statement from the Rutgers campus group Anakbayan Rutgers stated, “We must unwaveringly say that fighting for the basic rights to life, land, water, and democracy for Palestinians through boycott or any other means is not a crime, and it is not anti-semitic. The passage of this unjust bill would fly in the face of both academic freedom and freedom of dissent, and more primarily the Palestinian people and their just struggle for liberation.”
____
Meanwhile, high school students concerned about their rights to advocate in the public schools have started a petition which stated in part: “We are opposing NJ bills S4001 and A5755 introduced by Sen. (Stephen) Sweeney (D-N.J.) and Assemblywoman (Annette) Quijano *. This proposed law dangerously conflates criticism of Israel with Antisemitism. It would punish legitimate dissent of U.S. foreign policy and its support for Israel. We support student rights to free speech in and out of school, (and to) criticize American foreign policy.” 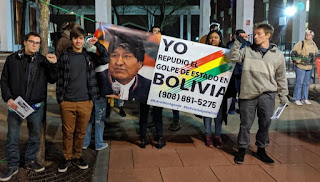 Members of AMLU were recently instrumental leading a protest on College Avenue (Rutgers, New Brunswick) to condemn the US supported murderous right wing coup against the legitimately elected president of Bolivia Evo Morales.  See report.  Israel exports its products of violence, counter insurgency expertise, its cyber hack and surveillance products to fascist regimes all over Latin America so it is important for the effort to oppose US intervention and war in Latin America to protect our rights to criticize Israel’s direct role in these deadly policies.

There is more news today on the attempt to repress and criminalize solidarity and anti-war voices in NJ.  A volunteer lobbyist, requesting anonymity given the current repressive political climate was in Trenton talking to Assembly members.  The lobbyist stated that most Assembly members they met are opposed and some who were originally supportive are now opposed.

Ironically though, one assembly member, Gary Schaer, who has a significant Arab constituency as he represents Passaic, NJ, with a concentration of Arab voters, is a strong supporter of the repressive bill.  It is ironic because his constituency will be impacted as members in the community support the victims of violence in the Middle East, including Palestinian victims of Israeli violence.  The lobbyist stated that we need to stay strong to defeat this bill and that he was told that a similar bill could be introduced - even if this one is defeated.  The lobbyist urges everyone to stick to the fight!

AMLU and the Daily Targum were in harmony on a major point in each of the two op-eds - the need for student action.  As AMLU stated, “We invite you to join the New Jersey Committee to Protect Dissent to protect the rights of students and faculty to discuss and criticize U.S. foreign policy and to support the struggles of the Palestinian people.”

For their part, the Targum editors urge: “Truly any campus group that believes in free speech as a blood right must recruit support to fight this issue, and all Rutgers students — those who stand on either or neither side of the Israeli-Palestinian dispute — must be willing to join in this fight. We all attend a public school and thus would be heavily impacted by this excuse of a bill. We must send the message to our legislators that although we are public, we do not exist to be hammered under the thumb of our lawmakers.”

As part of #NJAntWarAgenda - if you are interested in stipended anti imperialist and pro student rights (especially regarding this kind of bill) for campus organizign - text 908-881-5275.