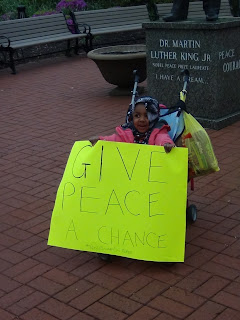 Recent Demonstrations Against US War Moves In NJ:
Posted by Theresa Markila at 8:45 PM No comments:

Marshall Plan: Self Delusion of US Exceptionalism

I was asked the following question by a reporter: 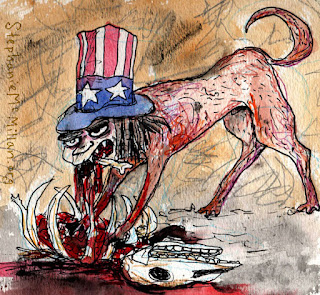 Good morning! I really would like to ask your comment. The US Congress published the resolution celebrating the success of the Marshall Plan. It was an American initiative to aid Western Europe, in which the United States gave over $13 billion in economic support to help rebuild Western European economies after the end of World War II. The goals of the United States were to rebuild war-devastated regions, remove trade barriers, modernize industry, make Europe prosperous once more, and prevent the spread of communism. Modern resolution «calls upon all Americans to rededicate themselves to the ideals that inspired the Marshall Plan: international cooperation, democracy, free enterprise, and universal respect for all».

If you don’t mind I would like to ask you about your attitude to the Marshall Plan. What is your attitude towards this plan? Nowadays is it still necessary for America to promote democracy in the world and to support financially other countries?

I also may call you if it is more convenient .Thanks in advance for your answer!

And I responded:
When the United States destroys a nation and people like it did in Iraq or in Libya - it owes unconditional reparations to the peoples - who it has slaughtered - also for the infrastructure it has destroyed. It is a debt that is never tallied nor ever paid. Instead US will use aid as a means to attempt to control what kinds of business interests allied with what political forces is put into power - not for democracy but to exert the kinds of power and control that the US intended to impose in the first place with its military might. Democracy is a word the US uses as cover to justify subterfuge, pressures, political support, military support but the real interests pursued by the US include resources, cheap labor market, consumer base, political, strategic and military ends including basing and other means to extend the US imperial reach,

There is nothing wrong with richer nations providing genuine assistance to other peoples and nations in need but it is never without a price when the US is providing such assistance - it is always with ulterior motives.

The US should also provide such assistance domestically to meet the full needs of its own people - including recovery and support for Puerto Rico, restoration of water at FLint and other cities around the nation, full funding for schools, single payer health. These aspects should be universal but should also be domestically provided but instead resources are expended on military extension of power and other means to extend power and maintenance of an imbalance where a very infinitesimal part of the US and world population controls most of the wealth and an overwhelming majority of world must suffer for a bare existence.

Marshall Plan would be ok if it was motivated by peace and well being and a true spirit of world cooperation. It is obvious to most of the people of the world that is not the case.. It is US exceptionalism that allows the powerful in the US to maintain its self delusion that it is with benevolent purpose, as opposed to as a means of extending empire and power - that US aid is provided to other nations and peoples.
Posted by Bob WItanek at 5:00 PM No comments: