NJ is saying “NO MORE COUPS” and staking out clear opposition to the US backed fascist military coup d'etat against the nation and people of Bolivia.    Back to back protests in 2 NJ cities took place this past week, on Thursday November 14 on the New Brunswick campus of Rutgers and on Friday November 15 outside the offices of Senator Menendez, who played a direct role in orchestrating the coup, and Senator Booker, at One Gateway in Newark, NJ.  At the Newark event, the formation of Comite Bolivia NJ (interim name) was announced and a leaflet with information about the new committee was handed out to participants.

The Rutgers protest was attended, all told by about 50 protesters, some staying briefly and others for the full hour long event.  Four large banners from #NJAntiWarAgenda were hung between trees including a 6-foot banner depicting Evo Morale, and in Spanish, calling for his restoration and the reversal of the US backed right wing violent, and according to the protesters, “fascist” and “CIA-Backed” coup.  A popular chant of the Rutgers protesters was “NO MORE COUPS! RESTORE EVO MORALES!” The event drew attention with many passers-by and some who disagreed gathering to watch the event - some shouting out their opposition. The Rutgers event also addressed other issues of concern including the US backed Israeli bombing of Gaza that has killed several dozen in recent days.  At the end of the rally, about a dozen students marched in the street up College Avenue behind the Evo Morales banner and chanting support for the Bolivian people. 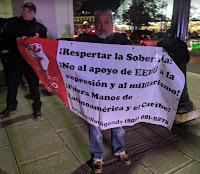 Green Party candidate for US Senate Madelyn Hoffman who challenged Golpista (coup maker) Menendez in 2018 spoke out about the need to challenge imperialist supporting candidates for election and the horrendous history of imperialism in Latin America.  Her presentation is in this video. 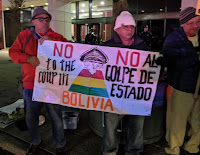 0:00 Natalia, representing Party for Socialism and Liberation (PSL) speaking on recent developments of Latin American struggle.
2:42 Dr. Rey Tapia, Bolivian Scholar with a Bolivian perspective on the struggle
5:53 Bob Witanek explains Comite Bolivia and describes November 2 event that occurred in Princeton linking 7 national struggles in Latin American and the Caribbean.  (A video from this event is here: https://www.youtube.com/watch?v=EDmnFUUNg3I& )
8:19 Jay Arena of Resist the Deportation Machine connects anti-war, anti-imperialist struggle to the struggle to close ICE concentration camps including the Essex County facility on Doremus Avenue

12:49 - Bob Witanek music break sings “Farabundo Marti” about the struggle of the people of El Salvador
17:19 - Jaime Herrera of Comite Roque Dalton FMLN (El Salvador) condemns Menendez involvement in the coup and as an opponent of all fo Latin America struggles and talks about the links between the liberation struggles in Latin America
22:54 Ben Morris a leader of high school student resistance to war and imperialism talked about the struggles to remove recruiters and police from the high schools
24:00 Lisa Davis representing Peoples Organization for Progress and Black is Black nailed US imperialism and called for a “no compromise” position opposing candidates of both parties that support war and imperialism
29:10 John Lisowski representing American Party of Labor gave some of the current background on the Bolivia situation 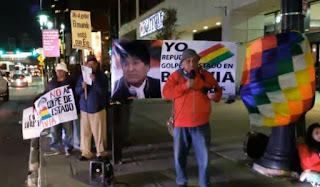 The back to back rallies indicate a strong NJ organizing effort that is responding in real time to events as they unfold - we need to consolidate this effort and build a support committee for Bolivia because this struggle will be protracted.

The call for formation of Comite Bolivia NJ reads as follows (Spanish followed by English): 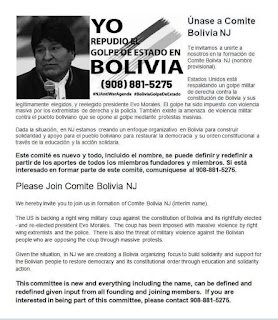 We hereby invite you to join us in formation of Comite Bolivia NJ (interim name).

The US is backing a right wing military coup against the constitution of Bolivia and its rightfully elected - and re-elected president Evo Morales.  The coup has been imposed with massive violence by right wing extremists and the police. There is also the threat of military violence against the Bolivian people who are opposing the coup through massive protests.

Given the situation, in NJ we are creatong a Bolivia organizing focus to build solidarity and support for the Bolivian people to restore democracy and its constitutional order through education and solidarity action. 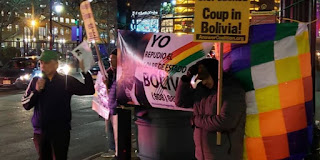 This committee is new and everything including the name, can be defined and redefined given input from all founding and joining members.  If you are interested in being part of this committee, please contact 908-881-5275.

The following is a statement from the Rutgers students that mobilized against the coup:

“We are fighting for indigenous rights, the conflict in Bolivia stems from the long history of colonialism in Latin America. We find it abhorrent that the first Indigenous president was ousted and replaced by a Christian fascist who views the traditions of the indigenous people in Bolivia to be “satanic”. People’s lives are in danger, and in the imperial core, Americans must denounce against the crimes this government implements in their name. We stand and we shout in solidarity with all those across Earth that are being held hostage by the American Empire. We won’t stop fighting, we won’t be silenced. Everytime the US decides to drone strike a poor country, we will be there to denounce it. We will be back.”


NEXT EVENT: U.S. Imperialism and Its Impact on Peace, Justice and the Environment of Latin America - What is Happening Today and What We Can Do to Change It

Print fliers from this link


Thank you to Madelyn Hoffman and Colombia Grass Roots for taking the lean on organizing this upcoming event. 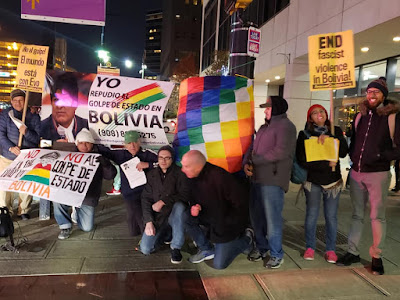 Tell Senators Menendez and Booker that you support Comite Bolivia NJ by retweeting: