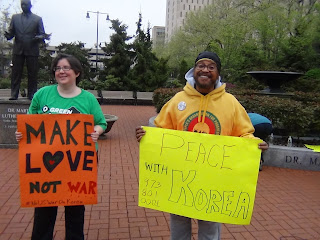 On April 26, the same day that the White House called an all Senate meeting to promote possible military action against North Korea, about 25 area anti-war protesters, led by Peoples Organization for Progress, the NJ Green Party and NJ Against US War on Syria and the Middle East held a protest rally to state unconditional opposition to the idea of any US military attack against the Koreas. 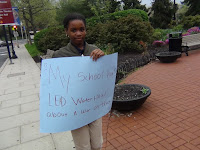 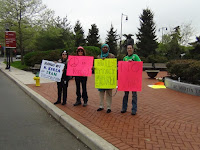 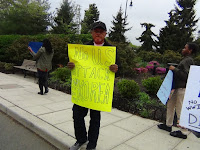 The protesters held hand made and pre-printed signs stating "Peace with" and "No US Attack On Korea".  They used a sound system to communicate to car drivers and passengers as well as pedestrians about the dangers of any such attack on Korea.

Through the sound system, each time vehicles queued up at a red light, Bob Witanek warned the vehicle passengers of the potential for "Hundreds of thousands of casualties North and South of the DMZ" in Korea and the potential of the conflict pushing toward full blown nuclear war with China and possibly Russia.  He also highlighted the billions being spent on US war operations as New Jersey still has never fully complied with the court order to fully fund Newark schools - as well as highlighting a litany of other unmet human needs. 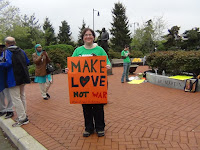 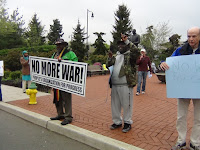 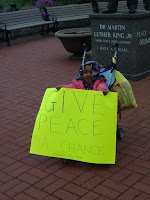 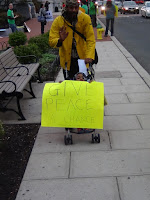 The passers by were invited to take pictures of the protest to post on social media and according to the organizers of the rally, several dozen did so, both from vehicles and among the pedestrians.

One father with his toddler daughter in a stroller stopped by to join the rally and after having his picture taken with a sign saying "Give Peace a Chance" his toddler daughter indicated with her outstretched arms and her finger motions that she wanted to hold the sign.  The father concurred so a the sign was given to her and when they left she clutched to the sign as they traversed down the block - taking the protest down the road.

I believe when we have events like this one where there is pedestrian traffic – we should put effort into this tactic – encouraging passers-by to agree to participate – even if just for a minute – holding a sign and allowing us to take a photo of them holding a sign. We should have a handout to give them with a  #HT Hash tag that links to more information about the event.  We can offer an idea of a phrase to put with the posting and contact / URL information.  This will serve as a social network bullhorn to spread our message even further. 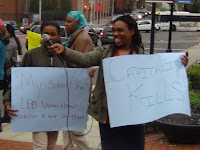 Before the rally closed, dispensing from his usual speech, Peoples Organization for Progress Chair Lawrence Hamm played "Give Peace a Chance" and "For What It's Worth" through the sound system, ending the rally that was often times offering expressions of anger about the current situation on a peaceful note.  https://www.youtube.com/watch?v=BjrIS-ZN3yE&feature=youtu.be
According to Bob Witanek, a rally organizer, one of the goals of the various organizations that have been rallying against the war moves of the current US administration is to develop throughout New Jersey the ability to respond to war escalations and threats with larger numbers on short notice.  This is the third such rally during the month of April, earlier rallies in Newark and Highland Park responded to a missile attack on Syria and the use of an MOAB, the largest non-nuclear bomb in the US war arsenal in Afghanistan.

Meanwhile, also on April 26, the Leonia Vigil for Peace and Justice continued its persistent ongoing protest against US war making at a vigil protest action in Teaneck.

Here are link to a Bergen Record and Peace News blog article on a rally by Leonia Vigil for Peace and Justice from earlier this month:
http://www.northjersey.com/story/news/bergen/teaneck/2017/04/12/teaneck-peace-vigil-demonstrates-against-military-action-syria/100327356

In the lead up to the event, we first proposed the idea of an emergency response to the White House bipartisan war meeting in a blog article and then – once Wednesday evening in Newark was decided for the event, a second article / press release provided the details.  The two articles were widely shared to about 50 area activist groups on Facebook and the combined readership of both articles was over 1600.  Though at least 4 of us sent the press release to multiple Essex County outlets we were unable to garner interest in actually covering this critical and timely protest event.

Organizations that have been driving the efforts to respond to the growing threats of war in NJ include: 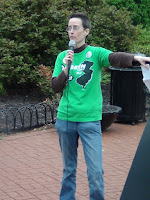 While we are not coordinating with them yet – this is another group with activities in motion on the ground around protesting the war moves and threats of the US administration.

Other organizations we hope to incorporate into the efforts to unify NJ against war include:
NJ Philippine Solidarity Committee and
Jersey City Peace Movement 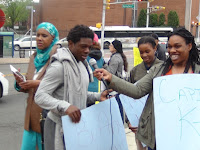 NJ Against US War on Syria and the Middle East, with approved support of Green Party of NJ is setting its sites on Bedminster where it has been reported President Trump could be spending some time this summer at his Trump National luxury golf resort. 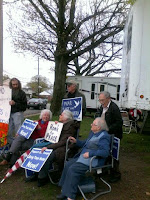 The group has proposed formation of a vigil committee to coordinate protests there.

We are also considering a regularly scheduled - perhaps monthly - anti-war presence on the streets of Newark - stay tuned for decisions and details.
Those who want to get more involved can call or text 908-881-5275 and on Facebook join:
NJ Against US War on Syria and in the Middle East 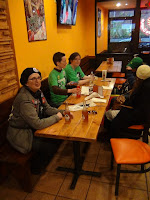 As is usually the case, we some of us went out and broke bread (tacos) after . . . and discussed future anti-war organizing - if you on the line with us - and you got some time after - join us!

Of course these actions must grow in strength and frequency - as being reported - Democrats in Senate are starting to get in lock step with Trump's march toward (nucelear) war with Korea:

Dems lining up for war on Korea:
http://www.washingtonexaminer.com/sen-chris-coons-congress-might-have-to-support-military-action-against-north-korea/article/2621672
Posted by Bob WItanek at 12:37 PM