NJ Against US War on Syria and in the Middle East 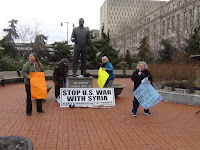 NJ was able to pull together an emergency protest in response to the US launching of cruise missile attacks against the nation of Syria less than 24 hours after the US attack.  On April 6, the US launched 59 cruise missiles at an air force base which is also where Russian soldiers are stationed.

Twenty or so attended but there were at least a half dozen others that showed up as we finished or were on their way at that point and missed the event.

While ideally 100s would respond to such a serious war escalation – this is a positive development that NJ was able to respond at all on such short notice.  We are setting the tone for escalating street resistance in response to escalating US war making and the very real threat of nuclear confrontation between the US and Russia and / or China. 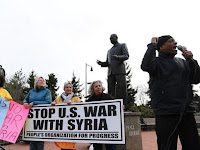 Given the emergent nature of the protest it was not feasible for existing organizations around the state to be able to formal enact resolutions to support the protest. 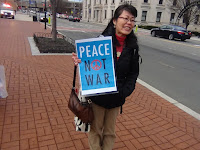 We organized the event through a Facebook group that we had set up around one of the previous situations where all out war with Syria seemed possible.  Up until Thursday night the group existed in Facebook world only but since we were able to successfully organize and put NJ on the map in opposition to war escalations against Syria we are proceeding forward as a formal organization – with the current title – still being vetted in our membership: NJ Against US War on Syria and in the Middle East.

We invite all that agree with the objectives suggested by this organization name to join us – first – if you are on Facebook by requesting to be added to our Facebook group:
https://www.facebook.com/groups/342587736087236

The measure of the success is not just who attended but the activity around promotion of the event.  The night before the event I wrote a press release and set up a blog for the purpose of moving the effort forward.
http://njnouswarinme.blogspot.com/2017/04/immediate-release-nj-to-protest-syria.html 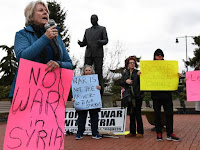 The press release, which was viewed close to 1000 times was immediately reblogged by David Rutherford on his Plainfield View site:
https://plainfieldview.wordpress.com/2017/04/07/emergency-nj-protest-today-against-the-us-war-on-syria

We were on the front page of the Record, a north NJ paper.  They also had a nice on line write up with a set of 6 pictures.  The reporter quoted Madeline Hoffman, Director of NJ Peace Action and me and the reporting was fair and balanced.

Here is the part about us:
In Newark, activists converged on Martin Luther King Boulevard on Friday afternoon to denounce the U.S. strike that launched 59 Tomahawk missiles at a Syrian air base, which Syrian officials say killed nine people.

Bob Witanek, a rally organizer, said the U.S. shouldn't get involved in more wars in the Middle East. He said it was hypocritical given the civilian causalities the U.S. has caused in recent strikes in Syrian and Iraq.

"We are not in a place to say we are the arbiter of what is horrendous, when every other day there is an article about civilians being killed by an air strike or a drone strike," he said. "A poison attack sounds particularly horrendous but a bombing attack kills you just as bad." 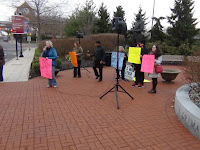 Witanek  was also concerned that the situation could lead to an even worse confrontation with other nations, including Russia, which has been a critical military and political ally to Assad.
Madelyn Hoffman, executive director of New Jersey Peace Action, questioned the legality of the airstrikes.

“The airstrikes are an act of war, and a war has never been officially declared by U.S. Congress,’’ said Hoffman, who planned to attend the rally in Newark on Friday.

She said that increasing violence and military action will not improve the situation in Syria. “It’s up to the people of Syria to decide who their leader should be,’’ she said.

She also expressed concern that the airstrikes threaten direct confrontation with Russia. 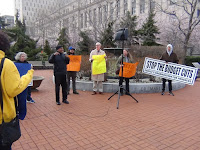 “We don’t want to escalate tensions with Russia,’’ she said, noting that the missiles were launched on the 100th anniversary of when the United States entered World War I. “Is this going to trigger World War III and how do you pull the dogs of war back once you have unleashed them?"

The rally was also covered by Newark Patch:
https://patch.com/new-jersey/newarknj/essex-county-anti-war-protesters-rally-against-syria-missile-strike-newark

PEOPLES ORGANIZATION FOR PROGRESS CHAIR LAWRENCE HAMM AND NJ PEACE ACTION DIRECTOR MADELYN HOFFMAN CRITICAL TO SUCCESS
As most of what happens in Newark as far as protests for justice, peace, economic equality, the Peoples Organization for Progress played a key role.  I had somehow arrived with my Megavox system’s battery kicked.  Lawrence Hamm came with his two Megavox speakers and speaker poles and reliable microphones to save the day – allowing us to broadcast the event up and down the blocks, across the street and the the passers by.

Another stroke of luck was when a passer by Jamaal live streamed the presentation by Lawrence Hamm on Facebook – receiving 100s of hits.  Jamaal later shared the video to our group and granted permission to upload it to Youtube. 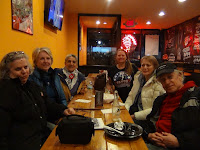 The rally was also addressed by Bob Witanek, Carol Gay of NJ Labor Against War, Madelyn Hoffman, Director of NJ Peace Action and Jay Arena, Newark resident and representative of Movement for Socialism and Manijeh Saba,

Afterward a half dozen of us held a dinner meeting where we decided to proceed with the formation of this organization and the continuation of organizing resistance to US escalation of its war on Syria  - which is important because today the Trump administration wrote to congress indicating its intentions to continue with more military aggression against Syria and probably other attack targets.

For more information about NJ Against US War on Syria and in the Middle East you can join our group or call / text 908-881-5275.

- we need to develop bigger, better, quicker war response mechanisms - we need 1000s in the streets for each escalation - else we can lose our lives and the planet possibly within weeks!
Posted by Bob WItanek at 7:42 PM