For the third time in the month of April, NJ peace and justice organizations are banding together for emergency protests against the war moves of the US administration.  In this case, NJ Against US War on and in the Middle East and the Green Party of NJ along with members of other state and local organizations are protesting to demand that there be "No US Attack on the Koreas," as they put it.

The priotest is planned for Wednesday, 4:30 pm at the MLK statue on MLK Boulevard and 13th Street, near the Old Records Hall in Newark.  The planned demonstration will occur on the same day that US President Trump is calling the US Senate to the White House for a meeting to discuss the topic of Korea.  The peace organizers believe that this indicates a stronger likelihood that the US could launch an attack on Korea.  They point to comments by the US Ambassador to the United Nations Nikki Haley suggesting possible US strikes on Korea should North Korea attempt another missile test.  The US just completed naval exercises with Japan and the US air craft carrier and related war fleet, including a nuclear powered submarine, are reportedly headed toward Korea.  The Trump Administration had recently claimed that the same war fleet was headed for Korea when it was actually moving toward the opposite direction for the exercises with Japan.

According to Bob Witanek, a co-founder of the NJ Against US War on Syria and the Middle East, " A US attack on Korea will result in counter retaliation and vice versa - that can within days result in the deaths of 100s of 1000s of Koreans (and others) north and south of the Korean DMZ.  There is extreme danger also of escalations regarding other world nuclear super powers including China and Russia.  Indeed we could be on the brink of devastating use of nuclear weapons by the US, Korea, China and Russia"
The group has set up a Facebook event: -
https://www.facebook.com/events/452209705119425/

For more information about the event, readers are encouraged to call or text: 908-881-5275 or write to: bwitanek@igc.org .

The NJ Against US War on Syria and the Middle East earlier this month, together with the People's Organization for Progress, Green Party of NJ and the Central Jersey Coalition Against Endless War held emergency protests earlier this month, against the US cruise missile attack on Syria and the use of the MOAB, the most powerful non-nuclear bomb in the US war arsenal in Afghanistan and to demonstrate opposition for further war escalations incuding against Korea. 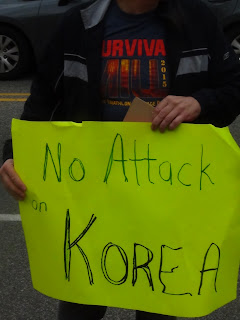