On March 27, an all day symposium on the Rutgers University campus co-sponsored by the “Miller Center for Community Protection and Resilience” and by the Office of Rutgers President Barchi entitled “Fighting Hate While Preserving Freedom: A Best Practices Forum” will occur. 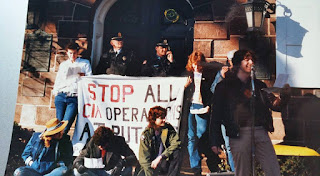 The Miller Center for Community Protection and Resilience is connected to the Intelligence Community Center for Academic Excellence (IC CAE),  a US intelligence program sponsored by a $2M grant from the Defense Intelligence Agency (DIA).   This program offers an intelligence minor, paid stipends for field work with the FBI, NSA and CIA, regularly features guest speakers from those and other intelligence and police agencies, and also provides training for current agents of the various US intelligence agencies.  It is also a recruitment operation for these agencies, using faculty members, administrators and even students as recruitment agents.  Agencies operating through the IC CAE  include DIA, NSA, CIA, DHS, ICE and FBI.

Ostensibly the forum being sponsored by these spy agencies of the National Security State is focused in part on the topic of Anti-Semitism with a featured speaker from the ADL (Anti Defamation League) and another from  B’nai Shalom.

The featured keynote speaker is former head of the Department of Homeland Security Jeh Johnson, who served during Barack Obama’s second term as president, presiding over the deportation of approximately 1.5 million immigrants.

There is nothing wrong with talking about ways to oppose hatred in its many forms; it is, however, a dangerous situation when you have several agencies of the national security state teaming up with university administrators with a framework tying the topic to issues of freedom and First Amendment rights.

These agencies are all steeped in a history of direct participation using very extreme measures in suppressing freedom – of people within the United States as well as in the rest of the world.  They also have an interest in preventing students, faculty, staff, alumni, and the community from mounting an organizing drive against the repressive and destructrive policies they are carrying out.  They are the last entities that should be involved in defining limits to freedom and First Amendment rights under the guise of “fighting hate.”

This brief commentary piece can not provide a complete history lesson of the nefarious role of these agencies. Briefly though, the following are some reasons why the agencies mentioned should not be in the business of defining what are “best practices” for respecting freedom and opposing hate:

DHS / ICE - The keynote speaker Jeh Johnson is the former head of the Department of Homeland Security which commands Immigration and Customs Enforcement (ICE).  He presided over the deportation of 1.5 million (about) immigrants during the second term of Barack Obama—an immigration crackdown that continues under the Trump Administration.  ICE is currently targeting many activists  in the struggle for immigrant rights for deportation.  The ICE crackdown is contributing to a climate of anti-immigrant hatred.  Many are being forced into privately run detention centers and are being pressed into forced servitude/literal enslavement.  ICE has nothing to offer to a conversation about freedom or opposition to hatred.

CIA – The current nominee to head the CIA, Haspel is literally a torturer who destroyed damning evidence. The CIA presides over part of the US drone strike programs responsible for the deaths of 1000s of civilians including women and children. The CIA’s nefarious history includes every kind of violent and criminal operations, including but not limited to: death squad promotion, sabotage, money laundering, drug trafficking, sponsorship of coup d’etats against democratically elected representatives or governments opposed by US multinational corporations.  Should the CIA be defining limits of free speech at RU?  It is also relevant that the CIA aided a New York Police Department intelligence unit that set up and maintained a "safe house" near the College Avenue campus at Rutgers for the purpose of spying on Rutgers Muslim students and New Brunswick residents.

FBI – Without going into a history lesson on the FBI role in suppressing dissent in the US, right now, the FBI has a Black Identity Extremist desk that is making an argument for a crackdown targeting Black activism—should this be what is going to define what free speech at Rutgers is?

DIA - the Pentagon’s intelligence agency, is conducting warfare, threats, operations, threatening exercises and maneuvers on every corner of the planet via drone hitting, collaborating with the occupation of Palestine, threatening Korea, Venezuela, Iran—so do you think there is going to be respect from the DIA for the free speech of the Rutgers community that is about to embark on a campaign of resistance to these warfare activities?  Do we want DIA defining limits of freedom?

NSA - As most now know, the NSA is violating the privacy of everyone using any kind of electronic communications, collecting everything from the internet, cell phones, and other devices.  The vast data is made available to other intelligence agencies and police agencies through the FISA courts, which approve over 90% of the requests to allow access to the data.

It is disingenuous for these intelligence agencies to team up with the Anti-Defamation League and B’nai Shalom organizations for this event.  They are couching the event as a defense against anti-Semitism.  The connection that is being attempted is in the context of national and local efforts that attempt to link opposition to Israel’s policies with anti-Semitism. By extension, this would further label opposition to aspects of US foreign policy in support of Israeli policies including military support, the growing direct US involvement with Israel in the occupation and in operations in Syria, in addition to the targeting of Iran and allied forces, as anti-Semitic. There are measures being advanced at the national level and at the state level throughout the United States that restrict and outlaw various forms of opposition to such policies, such as the Boycott, Divestment, Sanctions (BDS) movement.

Movements of dissent on college campuses, including fighting for increased wages, opposing US foreign policy, opposing University investments for various reasons, calling for free education or opposing tuition hikes, engage a diverse body of student, faculty and staff activists with Arab and Muslim students often at the forefront of such efforts.  The smear of Palestine support and solidarity as “anti-Semitic” is a common tactic.  It is then no surprise that the Office of Rutgers President Barchi has teamed up with the National Security State through its $2 Million DIA-funded IC CAE  and is hiding its attempt to curtail student and faculty freedoms along with First Amendment rights under the guise of fighting anti-Semitism.

Anti-Semitism must be opposed in all of its manifestations; however, the Rutgers community and supporters of higher education across the country must reject the couching of an effort to undermine and restrict student activism under the thinly veiled guise of “fighting hatred.”

It is clear that the national security state is using Rutgers – not only in its effort to undermine opposition to its policies on the Rutgers campus but also as a means to thrust its opposition to student activism in academia throughout the nation.

Universities in general and students, faculty, and staff in particular are facing adversity and challenges on many fronts.  The condition of this nation and world is precarious, and there is a growing likelihood of the US slipping from its current state of low to medium level warfare in many theatres around the planet towards full-scale ultimate warfare.

At times like this, such a cynical attempt by the national security state to control dissent must be confronted, protested, rejected, and sent packing!
CIA OFF CAMPUS!

For more on the topic:
Intelligence Center at Rutgers Protested at Newark Monthly Antiwar Protest