NJ Residents will be headed to DC to do support work outside the Venezuelan Embassy this weekend.

This will be the third week in a row a group of NJ residents headed to DC to do "Embassy Protection Duty" at the Venezuela Embassy in Washington DC.

The embassy has been surrounded by dozens of armed police from probably a half a dozen federal, state and local police forces .

Additionally, surrounding the building, are a CIA trained group of Venezuelans and possibly others, supporters of Juan Guaido - who self proclaims to be interim president - in a US attempt to foment a coup de tat against the nation and people of Venezuela.  The obviously well funded and highly organized group has surrounded the embassy and attacked anyone that tried to bring in food to the invited guests - which now number 4 still residing in the embassy.  The electricity has been shut off as has been the water.

Invited guests of the Bolivarian Republic of Venezuela have been staying in the embassy providing protection from its illegal seizuer of the embassy building, which is the property of the elected Venezuelan Government, by the United States through a combination of police and mob action..

NJ residents are set to hand in the letter from the Embassy Protectors Collective of their offer to leave the Venezuelan Embassy under a Protectors Agreement for corresponding embassies between US and Venezuela at the offices of Senator Menendez and Senator Booker.  They will rally outside from 2:30 - 3:30 and then bring the letters into the offices of the two U.S. Senatrors.

All are encouraged to join and participate in this message of solidarity and peace with the Embassy Protection Collective and the Venezuelan people and people of all of Latin America.

PROPOSAL FOR NATIONAL MARCH POSSIBLY MAY 25

While not decided, it was discussed on a conference call a possible national march on May 25, even if the Venezuelan guests have been evicted or have left - especially if the embassy was not put under protected status as is being requested by the guests.

Protection supporters have been responding on an emergency basis for weeks on end.  The idea would be to have an event of a more participatory character - with more organized transportation and organized participation.

We urge everyone who can to join daily mobilizations to prevent the illegal seizure of the Venezuelan embassy by supporters of the U.S.-backed coup and protest the siege imposed on embassy protectors by a right-wing mob that has assembled outside. With the full cooperation of the Secret Service, the coup supporters have blockaded food and other essentials needed by members of the Embassy Protection Collective who are living inside the building as invited guests of the legitimate government of Venezuela.
The mob has already carried out numerous acts of physical violence as well as hurling racist, sexist and anti-LGBTQ abuse. But this has only strengthened the resolve of the embassy protectors. What is most needed now is a show of force on a daily basis by all those who believe in Venezuela's right to determine its own destiny and oppose the U.S. war machine.
ANSWER Coalition organizers and volunteers have been participating in this historic effort for the past month. We want to thank everyone who has traveled long distances to join us here in Washington, D.C. at different times during the past month. We want to thank those who have been able to remain and help create a sustained presence. This has been a fantastic example of cooperation with support from numerous organizations and individuals who have come together in opposition to the Trump administration's brazen efforts to violate international law, impose crippling economic sanctions, topple an internationally-recognized sovereign government and drag the United States into another war -- this time in Latin America. We can all make the difference by working together. 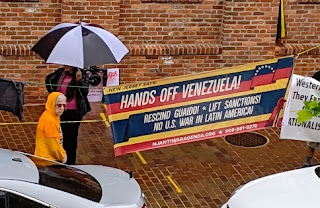 A group of 4 NJ residents traveled to Washington DC to support the Venezuelan Embassy Protection Collective.

I guarded our banner for 6 hours outside the Venezuelan embassy - first thing the next morning, Secret Service chopped down 2 trees including the one the banner is attached to!

This PROVES that our hanging this banner - WAS A THORN IN THE SIDE to imperialist monsters that want to slaughter thousands of Venezuelans!

I mourn for the trees - - and soon if the US continues in this direction it could be 10s of 1000s to a million or more Venezuelans - 40,000 already died through the economic warfare of sanctions according to a recent report - that follow the fate of these two trees whose only crime is being across from the Venezuelan embassy under the siege of a CIA coup - for having supported a message making demands to abandon Golpista Guaido, to end the sanctions and avoid US war in Latin America.

Video from May 5 when El Pueblo Unido Jamas Sera Vencido was played from Embassy followed by 50 youth marching up to join our protection rally:

Though the Water and Lights are OffThe CIA Surrounds the EmbassyWont you please come to DC To End this fascist siege!
Posted by Bob WItanek at 9:37 PM