Veterans and GI's are Anti-War Allies! 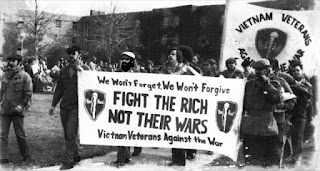 If you want to stop war and challenge the empire then help our soldiers and veterans organize.

Our soldiers and veterans carry special knowledge.  They have seen first hand the horror and futility of war.  What we understand as endless war, empire and occupation they know through  personal experience.  Today’s soldiers and veterans have been treated worse by the US government than any generation of soldiers in well over a century.

In an effort to hide the war from the US public the burden has fallen heavily on approximately 1% of the American population to go into combat.  That 1% sees far more combat than soldiers did in WWII or Vietnam or Korea.  Two, three, and more tours are not uncommon.  This is far more than humans can endure. The consequences in PTSD, suicides and casualties are more than tragic: this is the empire eating its own.

But soldiers and veterans also have so much to teach us:  they know the machine and the know how to organize.  Their training can teach us the kinds of dedication and discipline we need to build a mass movement with real power to disrupt the war machine.  Maybe most important they can teach us how we can recapture the revolutionary spirit that once made America truly great. With a little help from their friends soldiers and veterans can once again be leaders in a new anti-war movement.

Since the Vietnam War there has been an unbroken tradition of opposition to war from servicemembers, veterans and their families.  During the Vietnam Era soldiers protested, refused combat, insisted on discussing actions rather than simply following orders and resisted the war effort in ways large and small.  As veterans they organized the Vietnam Veterans against the War and came to lead the anti-war movement in the early 1970’s. The Veterans For Peace and Iraq Veterans Agains the War continue the struggle.

Want to help our service-members stand against war and the oppressive conditions of military life?  The tradition of resistance continues.  Start by supporting any of the following organizations:

VVAW (Vietnam Veterans Against the War)

Given support and an opportunity to stand up for the kind of values and ideals that they really wanted to fight for, a new GI and veteran movement is ready to spring to life. We saw that movement come alive when the veterans supported the courageous water protectors at Standing Rock.  Reach out to soldiers and veterans, build a civilian movement to support them, and when there are many Standing Rocks the soldiers and veterans will answer the call.

Richard Moser is author of “New Winter Soldiers: GI and VeteranDissent During the Vietnam Era.”  Moser writes at befreedom.co  .
Posted by Bob WItanek at 3:33 PM