Facebook Event
After a more than half a dozen protests around NJ as part of nearly 150 protests in the U.S. and internationally to oppose US threats and aggressions toward the nation and people of Venezuela, NJ residents are joining forces for a march on Washington DC on Saturday, March 16.

Transportation is being provided to the national march which will culminate at a rally in front of the White House by NJ Anti War Agenda in coordination with the Hands off Venezuela NJ national coalition.  The suggested donations for a round trip to the Washington DC protest are $50 full cost, $40 discounted. There are also subsidies available down to $20. 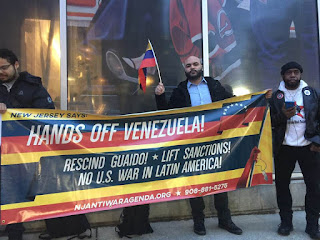 The bus will leave 7 am from Lincoln Park in Newark with a 7:30 am pick up in New Brunswick New Jersey.  The bus is scheduled to return around 10 – 10:30 to those locations.

Contributions are also being sought for those who can help participants eager to march but without financial means.  You can arrange your participation as well as support the transportation costs of others at this funding link:
https://fundly.com/hands-off-venezuela-march-on-dc-march-16?fbclid=IwAR3xCSsfdbWQdVDg2olV2-P0041RQHLZ2x45KhNyaWSickH4XxpDycGxsRs

According to Bob Witanek, a founder of NJ Anti War Agenda as well as Hands Off Venezuela – NJ, “The US is teetering dangerously toward direct military intervention to seek its goals of regime change in Venezuela. Its initial efforts to achieve a coup in Venezuela have gone wrong on many counts:

The inability to get support from the United Nations Security Council and from the Organization of American States.

Refusal of international aid agencies to participate in the aid scheme which they see as an attempt to foment US intervention.

Statements from Brazil, Colombia and the European Union stating that they will not participate in US military actions against Venezuela.

The complete lack of support for any coup from within the Venezuelan armed forces in spite of US planted stories that they were in talks with officers within those forces.

The majority of the nations of the world including almost all of Asia and Africa and including Russia, China, India, Cuba, Bolivia and Mexico are working to oppose US intervention.

The capturing of weapons being smuggled into Venezuela by the armed forces.

However with all of those failures, the US is still pressing forward with air force surveillance along the coast, a military build up in the Caribbean, a continued offensive to try to drum up flagging international support and organizing of anti-Venezuela operations in Colombia and Brazil.  Cuba has also reported US special forces being mobilized in Puerto Rico, the Dominican Republic and other Caribbean locations.”

Witanek states that the US and all of Latin America are in a “dangerous predicament at the brink of a major regional war that will bring massive death and destruction to Latin America and the Caribbean.”

For this reason, the organizations he has co-founded have joined a national effort for a march on the White House in Washington DC on March 16 an event called by the ANSWER Coalition.

According to Witanek, “There is a new wind blowing in the US and throughout the world.  This latest threat of US war is bringing together forces throughout the nation and world.  In Colombia and Brazil, the people are working to organize opposition to support those governments are giving to coup plans.  This march will come at an opportune time to issue a resounding NO to any attempt for the US to bring war, the deaths of tens of 1000s and ultimate destruction to Venezuela.”

NJ residents who oppose war will have a second chance this month to march in Washington,  D.C. on March 30 to oppose NATO and US warfare facilitated by NATO. At least one NJ bus will deliver NJ participants to that event. This 2nd event will be organized by the U.S. Peace Council and the NJ Peace Council, chaired by Madelyn Hoffman. Said Hoffman, “The blatant , arrogant and illegal coup attempt is the first foray of NATO into Latin America. Colombia is a global partner of NATO and would be used as a launch pad for U.S. troops to move into Venezuela. While Colombian leadership may be willing, the people are not. We need a strong one-two punch to show that the people oppose U.S. efforts to start another war.” Arrangements for transportation to that march can be made through the same link .

Camden area is organizing vans and car pooling and readers can connect with that effort by contacting Michael Scheinberg (https://www.facebook.com/michael.scheinberg.9).